Fudo-Myoou is the final boss in the Final Act of Momohime's story. He is known as the protector of the Buddha and the God of Wisdom, a slayer of demons and the enforcer of the god's will.

Fudo-Myoou appears at the end of Momohime's story. His subordinates, Kongara Doji and Seitaka Doji appear, having confiscated Jinkuro's Dark Resurrection Blade. While Seitaka Doji reprimands Jinkuro on account of having a blade being made from minerals in Hell and that he's not worthy of such a treasure, Kongara Doji chastises him for invading heaven with evil intent. They then proclaim that Fudo-Myoou has arrived to punish Jinkuro, but they end up summoning a statue of the deity.

In the first ending, after Jinkuro breaks the statue, the real Fudo-Myoou shows up in a wall of flames to mock him and reveals his true form. Jinkuro (in Momohime's body) tries to cut the deity, but the sword breaks and Fudo remains unharmed. Fudo-Myoou then declares that he will now annihilate Jinkuro's soul, but the defeated samurai retorts saying that in his current state, the innocent Momohime would be punished along with him and if that happens then Buddha's mercy is a sham.

Fudo-Myoou chuckles and agrees to spare Momohime, forcibly removing Jinkuro from her body and returning her soul to its proper place. He also (albeit off-screen) reveals to Rankai the depths of his corruption, causing the fallen monk to repent. Jinkuro is then dragged off to Hell, and the story ends as Momohime becomes a nun to pray for Jinkuro's soul.

While the Fudo-Myoou that Kongara Doji and Seitaku Doji summon is just a very large and imposing statue, the real Fudo-Myoou is far more imposing and has abilities worthy of the Buddha's protector. He carries a sword to slay demons, a rope to restrain evil, and has holy flames that burn away the sins of corrupted souls. It's implied in his dialogue with Jinkuro that he can completely destroy souls. Finally, his mere presence can reveal the depths of one's corruption and cause them to repent. 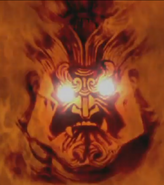 A close-up of Fudo-Myoou
Community content is available under CC-BY-SA unless otherwise noted.
Advertisement