What part of 'I don't remember anything' is so damn hard to understand? But if you think I'm going to let you torture or kill me, you can go screw yourselves.Kisuke

Kisuke (鬼助 きすけ, Kisuke) is one of the playable characters in the game, a rogue ninja who is the hero of Ninja Scroll of the Demon Blade. Having no memory of his past, Kisuke inexplicably finds himself a fugitive being chased for a crime he no longer remembers with only the memory to obtain a certain "katana". However, despite his intentions, battle seems to follow wherever he goes.

Kisuke tends to be a nice person despite the fact he uses the Oboro Style. Sometimes, he will make curt responses to others, but in general, he is polite and has only good intentions.

As revealed in the story of Arashimaru, Kisuke was born in the Uzuki clan before he was taken as an infant by the Iga ninja under the mysterious Mumyo. Raised as a Skull Valley ninja, Kisuke is given the task to steal the Kuzuryu Muramasa blade in the care of the Kagami house of the Narukami clan. However, having fallen in love with the sword's protector Torahime while posing as a servant boy, Kisuke turned on his fellow ninja and is mortally wounded protecting Torahime. But Kisuke is given a second chance at life by the spirit of Senju Oboroya who used the soul fusion technique he devised, ceasing to be while giving Kisuke exceptional mastery over the Oboro Style. But the process left Kisuke without any memories of his past as he is pursued by several ninjas who call him a traitor. After defeating them, Kisuke gains the support of Yuzuruha, who is impressed by his sword-fighting skills. Having no other clue on his past, he heads to the ninja base in skull valley. He meets Yagyu Yukinojyo who offers to stop his ninja from chasing him is he reconfirms their alliance. In order to do so, Kisuke is supposed to capture Torahime. After confronting Torahime, he starts to support her agenda while slowly regaining his memories and mission to seal Kuzuryu after the inugami within it consumes the shogun in its evil.

In the first ending to Kisuke's story, he eventually attacks the shogun's castle to act as a decoy for Torahime, who tries to retrieve the demon blade Kuzuryu, which contains an Inugami bent becoming a god. Once he reaches them, the Shogun has already fatally wounded Torahime and she dies in Kisuke's arms as he defeats the Shogun after allowing the Inugami to consume him. But in the end, Kisuke commits suicide after failing to convince the Buddha to revive Torahime's life. Torahime, who had ascended to paradise, however, begged that she and Kisuke may be reborn together for a second chance. Her wish is granted and Kisuke and Torahime are reborn as Kanbei and Ohana respectively, although with no memories of their past lives. After 10 years Yuzuruha is then sent to play cupid and reconnect Kisuke's and Torahime's fates.

In the second ending, Kisuke and Torahime find the Shogun killed by Torahime's sister Momohime, whose body is possessed by the spirit of Oboroya's fallen apprentice Jinkuro who claims Kuzuryu for his own scheme. Jinkuro recognizes Kisuke as carrying part of his old master's soul and challenges him for a fight to determine who the true master of Oboro style is. Kisuke is able to use his blade to destroy Jinkuro and free Momohime from the possession. Torohime is reunited with her sister shortly before she has to return to the afterlife, she had only been given 49 days to recover the blade containing Inugami, that her family had been guarding to protect it from misuse. Torahime's dying wish is that Kisuke watches over Momohime. Respecting her wish, Kisuke and Momohime become a demon blade hunter team, trying to free the land from the corruption through the demon blades.

In the third ending, possessing the fate-altering Demon Blade, Kisuke finds himself in the past at the point where he had stolen Kuzuryu and lost his memories. By altering the past when turns on his allies, Kisuke managed to avert Torahime's death while taking Kuzuryu with the intent to exhaust its evil by traveling the world in search of other evil. Before leaving, Kisuke promises Torahime that he will return to her.

He is the final boss of Momohime's second ending. 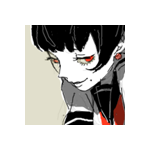