Muramasa: The Demon Blade Wiki
Register
Don't have an account?
Sign In
Advertisement
in: Kitsune, Characters, Non-Playable Characters,
and 3 more

Kongiku (紺菊 こんぎく, Kongiku) is, like Yuzuruha, a Kitsune serving under Inari. She shows affection towards Jinkuro at times expressing by showing jealousy towards Momohime. He, however, sees her as a tool to achieve his own goals. She acts as the main support character in Momohime's quest and can be found at any Inari shrine, that serves as save points. It is Kongiku that gives Jinkuro and Momohime a mask containing Senji Muramasa's spirit. This granted them the ability to forge demon blades. She steals the mask from her fellow Kitsune, which is a big risk she takes to support Jinkuro.

After Jinkuro, in Momohime's body, defeats the Blue Monk, Kongiku provides him the Muramasa mask to forge more blades and they set off to rescue Momohime's soul.

In the first ending, she is seen grieving the loss of Jinkuro after he sacrifices himself to save Momohime. It is unclear what she does afterward, but it seems likely that she aids Momohime to atone for Jinkuro's sins.

In the second ending, Yuzuruha finds about her theft of the Muramasa mask and punishes her by turning her back into a regular fox. After this Kongiku, now unable to talk or take on human form, joins Momohime, who has lost her memory and taken on the name "Oboro", in her quest to remember her past.

Kongiku seems to have feelings for her master. She is very jealous of Momohime, and at one point, threatens to destroy her soul. After Act 3, she asks Jinkuro if they should seal up Momohime's soul. To aid Jinkuro, Kongiku gives him advice as best as she can. Unfortunately, she sometimes rambles which causes him to become upset.

As stated above, Kongiku dislikes Momohime; at least to a point. She is jealous of Jinkuro's affections toward the princess at first. However, as the game progresses, she becomes Momohime's friend which is shown in her second ending. 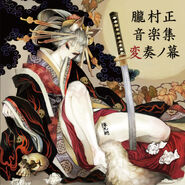