There is no way I could possibly go back the way we came by myself, but I can't just cower here and whine either!Momohime

Momohime (百姬 ももひめ, Momohime) is one of the playable characters of the game, the heroine of Pandemonium of the Demon Blade. As she is about to wed her soon-to-be husband, Yagyuu Yukinojo, she gets possessed by a demonic soul named Jinkuro. In order to obtain her body back, she and Jinkuro travel westward in search of Jinkuro's demon blade to undo his 'soul transfer' technique to possess Momohime.

Momohime is a gentle, and kind person. Her type of personality can touch the hardest of hearts and soften them. She's also clever, yet also has a fear of monsters. She wants nothing more than the best for those who she loves, and her friends.

Momohime is the princess of Narukami and sister to Torahime. She was going to marry Yagyu Yukinojyo; however, it is not long before the planned marriage that Yukinojyo is attacked by Jinkuro. He tried to take Yukinojyo's body to replace his own--which is dying from a chest ailment. Momohime protects Yukinojyo, but through her intervention, Jinkuro accidentally takes over her body. While trapped in Momohime's body, he, at first, tries to use her body until he finds a better one. But he needs to get his special blade back to use his 'soul transfer' technique. Kongiku had stolen a special mask that is used to forge Muramasa blades from her fellow Kitsune in order to assist her master. She tries to help Jinkuro and Momohime during their journey. They do not, however, find the sword and serving as a receptor for two souls Momohime's body grows weak from the constant soul swapping. Jinkuro, having grown fond of Momohime, seeks a way to save her body. Together, they visit important places ranging from heaven to hell.

In the first ending, they find no way to save Momohime and Jinkuro ends up offering his own soul to restore Momohime, going to hell in the process. Momohime decides to do everything she can to save Jinkuro and goes on a religious pilgrimage, canceling her plans to marry Yukinojyo.

In the second ending Kongiku's theft of the mask is found out by Yuzuruha. She punishes Kongiku by turning her back into a normal fox, while Jinkuro in the body of Momohime battles Yuzuruha's ally Kisuke. They wound each other fatally; Jinkuro uses a Spirit Fusion to save Momohime. By fusing his spirit with hers, he is able to save her. Momohime survives but loses her memory. She is taken in by an elderly couple who name her Oboro. After defeating an Oni that attacks her village, she discovers she is now proficient in the use of the Oboro Style and sets out on a journey to find out about her past. Kongiku, now a normal fox, joins her.

In the third ending of Momohime's route, with the help of the Muramasa, Jinkuro is sent back in time to the night where he attacked Yukinojo. Jinkuro finds himself in the past at the point he transferred his soul into Momohime, who does not know him at the time. Deciding to wait until Yukinojo is alone to attack, he successfully uses the Soul Transfer technique on him. After this, Jinkuro decides to marry Momohime while in Yukinojo's body. As for Kongiku, she disguises herself as a housemaid to be closer to them. Jinkuro refuses the Shogun's orders to attack Narukami and instead protects Momohime as her husband. In the epilogue, he continued doing mischief as "Yukinojo", and fathered three children.

Momohime, at first, hates Jinkuro. She does not approve of his actions and at one point forces him out of her body. She tends to be lectured by the demon of being "whiny," and "interfering." Yet, slowly, Momohime comes to care about Jinkuro. This is shown by her worries over Jinkuro in Act 6 and her second story of the Final Act.

Thus, the game suggests that Momohime has feelings for Jinkuro as he does for her.

In Kisuke's story, Momohime hates Jinkuro, and calls him a "senseless beast," which seems to contradict how she treats Jinkuro in her story. The reasoning may be that he killed the shogun, an act she considers too heinous to forgive.

Momohime's relationship with Torahime is only seen in Kisuke's second ending. However, Torahime and Momohime care for each other like sisters usually do. After Jinkuro is vanquished, Torahime watches over Momohime's body until she awakens. Before her passing, she wants Kisuke to grant her final request which is to pledge loyalty to Momohime and to help her no matter what.

Momohime's relationship with Kisuke is not a complex one. They meet at the hot springs, but nowhere else during the game. Kisuke, ironically, does not flirt, tease, or get attracted to Momohime. Instead, when Momohime tells him that he is being "rude," Kisuke will respond with "I was here first," and "This isn't your private hot spring."

In Kisuke's second ending, he fights Jinkuro, who is possessing Momohime's body. Kisuke recognizes Momohime as the girl from the hot springs. However their relationship improves after Torahime's death, Kisuke accepts her final wish for him to protect her sister and pledges his service and loyalty to Momohime. The two of them become a demon blade hunter team, trying to free the land from the corruption through the demon blades. They're shown getting along with occasional teasing, suggesting that they may be developing feelings for each other or will in the future. 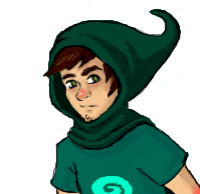