Muramasa: Rebirth, also known as Oboro Muramasa in Japan, is an enhanced port of Nintendo Wii's Muramasa: The Demon Blade for the Playstation Vita. This game includes some new features while still retaining the plot and gameplay from the Wii version.

Note: This section will provide the synopsis and perks of each DLC characters, for their Act summary and dialogue, please check out their story by pressing the highlighted links (e.g. Fishy Tales of the Nekomata).[] 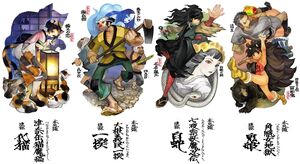 Okoi - Fishy Tales of the Nekomata[]

Fishy Tales of the Nekomata is a downloadable scenario for Muramasa Rebirth. It was released in Japan on November 7, 2013 and in North America on January 14, 2014.

The scenario follows Okoi, a Nekomata that is tasked with delivering a prized tea set to the shogun. However, she is pursued by her family’s chief retainer who will stop at nothing to reclaim the tea set.[1]

Unlike the main protagonists, Miike Okoi does not use Demon Blades. Instead, she fights with her claws. The “Forging” mechanic has been replaced by a skill tree that will allow the player to improve and strengthen her various abilities. Finally, Miike Okoi can use her Nekomata magic to use more powerful abilities. [2]

Gonbe - A Cause to Daikon For[]

A Cause to Daikon For is a downloadable scenario for Muramasa Rebirth. It was released in North America on February 25, 2014. It is available on the PlayStation Network for $4.99. [3]

In this chapter, you'll play as the downtrodden farmer Gonbe, who has taken it upon himself to ask the powers that be to re-think the taxes that are driving his village to the brink of ruin. With the spirit of his deceased wife Otae and some of his fellow farmers by his side, Gonbe sets off to fight for nothing less than the very survival of everyone he knows and cares about! Wielding only a hoe, sickle, and a simple bamboo spear, Gonbe will do everything in his power to defeat his foes and make his voice heard!

A Spirited Seven Nights' Haunting is the third downloadable scenario for Muramasa Rebirth. It was released in North America on July 15, 2014. It is available on the PlayStation Network for $4.99. [4]

In this chapter, you play as Arashimaru, a world-weary ninja who was assigned to assassinate a high-ranking samurai and steal the sacred treasure he was guarding. During his mission, the truth of his past came out into the light, unraveling the fabric of his existence and causing him to turn against his ninja clan.

While trying to take out a band of ninjas sent to kill him, Arashimaru inadvertently destroys the shrine of the water goddess Inaraki, who immediately curses him to die in seven days for his act of desecration.

While all of his weapons have their respective circle attack, Arashimaru can also summon Shirohebi when in the air by pressing circle. While summoned Shirohebi appears in her snake form and sends out multiple green balls that deal damage. This effect ends after a few seconds or when Arashimaru switches weapons.

Rajyaki - Hell's Where the Heart Is[]