Muramasa: The Demon Blade Wiki
Register
Don't have an account?
Sign In
Advertisement
in: Merchants, Money, Bosses,
and 2 more 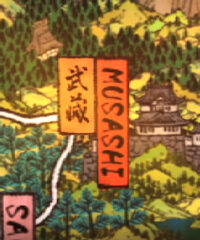 Musasahi is a providence in Japan. Here, Kisuke and Momohime both face off with a boss within the area.

This section will cover the bosses found here and the merchants with their items for sale. Note: Merchants sell different things for different characters as Momohime and Kisuke start on opposite sides of the map.

Wanyuudo is a demon who take the form of a burning oxcart wheel bearing the face of an old man. In Momohime's story, Wanyuudo has stolen the souls of the dead courteaseans in New Yoshiwara. Rankai, who took Momohime's soul, has given it to Wanyuudo. He is the second boss you have to defeat, and in turn, gives you the "Flames of Perdition" blade which enables you to destroy Orange barriers.

Once Wanyuudo has been defeated, you have the option to return and defeat him again, which awards you with the "Cowbell," allowing you to increase the chance of an enemy encounter.

To be written soon.