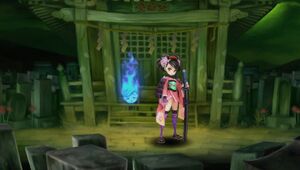 Awakening at the cemetery, Momohime remembers vaguely being cut in two and questions if she is in the afterlife. Searching for guidance, she meets a sinister monk believing her to be someone named "Jinkuro," but she replies that he must be mistaking her for someone. She later finds a monk named Rankai. He tells her to worry not as he already forced Jinkuro's soul out of her body. After speaking with him, Momohime finds a familiar green soul, Jinkuro. He explains that as she got in his way in taking the body of her husband-to-be, Yukinojo, and now he is forced to use her body. Jinkuro quickly reclaims her body, and Momohime finds herself to be in shock. After Jinkuro tells Momohime to obey him for the time being, he uses her body to defeat a Blue Monk. Once the Blue Monk is defeated, Jinkuro finds that Momohime's soul was stolen by the monks. Knowing that his borrowed body would become useless if anything happens to the girl's soul, he wants to dispatch right away, but waits for his servant Kongiku. After Kongiku arrives and provides him with a Muramasa Mask, they set off to Yoshiwara to rescue Momohime's soul.

Once in Yoshiwara, confronting Rankai, Jinkuro learns that the souls of girls being stolen and taken captive by a Wanyudo that is revealed to have obtained Momohime's soul from Rankai. After defeating the Youkai, Jinkuro retrieves Momohime's soul. He seems to be a bit kinder to her, despite his threat to seal her soul away if she does not behave herself.

Retrieved from "https://muramasatdb.fandom.com/wiki/Pandemonium_of_the_Demon_Blade?oldid=5635"
Community content is available under CC-BY-SA unless otherwise noted.