So Xian (aka Master Mumyo) is the main villain and final boss of the downloadable scenario A Spirited Seven Nights' Haunting.

So Xian was originally from China. Under the orders of the fourteenth emperor of the Ming Dynasty, he infiltrated Japan to throw the country into chaos by assassinating heads of state (the plan being that once anarchy ruled Japan, the Ming emperor would invade and conquer it). In order to fulfill this purpose, he created the Soul Transfer technique alongside Oboroya Senju as a means of obtaining immortality. Then So Xian (as Mumyo) took control of the Iga ninja under the name Soukan Konomura, so that they would do his dirty work. The clan would later adopt Arashimaru and Kisuke.

So Xian is confronted by Arashimaru at the end to the latter's story, where the the former is consulting the I-Ching and the zodiac for guidance. He ultimately foresees that his ruin will come from a white snake. Mumyo then reveals his plan to Arashimaru and Shirohebi before strumming his biwa and summoning the souls of all the ninja Arashimaru killed up until that point, who then form a Gashadokuro which serves as the actual final boss.

In the first ending, Arashimaru succeeds in killing So Xian. However, in the second ending the latter uses the Soul Transfer technique and makes Arashimaru his new host body. Then, he binds Shirohebi to his service and rechristens himself as Orochimaru to resume his mission to put Japan in utter chaos before Jiraiya and Tsunade face him in a final showdown.

While not directly stated, it's inferred that So Xian is a Taoist monk. What can't be debated is his skill in the spiritual arts, namely necromancy, binding a minor goddess, and the aforementioned Soul Transfer technique, which he's used to keep himself alive for 300 years. 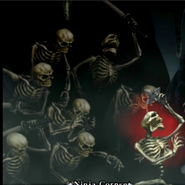 A swarn of dead Iga ninja

Shirohebi being bound after Mumyo takes over Arashimaru's body.
Community content is available under CC-BY-SA unless otherwise noted.
Advertisement